How to Build a Small Earthbag Dome 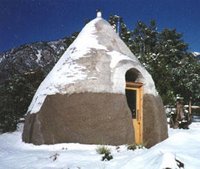 Kelly Hart says"...I recently received an email from a gentleman in Pakistan expressing interest in dome technology for building earthquake-resistant housing in that country. The massive earthquake a few weeks ago leveled thousands of homes, and the government is looking for ways to rebuild in safer ways. I responded that I thought that earthbag building would indeed be superior to conventional (un-reinforced masonry) building, and that I would put together a description of how to go about building a small dome that could serve for emergency (or more permanent) housing.

So I pulled out a series of photos of building my first experimental earthabg/papercrete dome, a small (14 foot diameter) building that could serve a variety of functions such as cabin, studio, storehouse, etc. I assembled these pictures along with text describing exactly how to go about constructing the dome on three interconnected pages, beginning at Green Home Building .

It seems to me that given the alarming rate of natural disasters striking our planet, displacing millions of people and disrupting their lives, we would be well advised to rebuild homes that can withstand earthquakes, hurricanes, and floods. Earthbag domes have this potential...and they are inexpensive and easy to build, along with being environmentally friendly!.."
Posted by Ugo Okafor at 3:29 PM