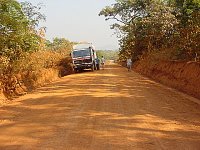 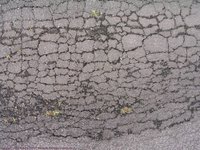 With soaring global temperatures,bitumen based roads seem not to be as durable because of their low melting points, although concrete is a better alternative to bitumen/asphalt, it is however more expensive to construct with.

The mountains of discarded polythene bags used for "Pure Water" in many parts of West Africa could be put to good use if municipal administrations in the area(Lagos, Onitsha,Accra,Younde, etc)could borrow an idea, that is currently being adopted in India.

The Tribune of India reports that "...The Chief Minister of Delhi, Mrs Sheila Dikshit, has given a green light to K.K. Plastics Waste Management company for supply of bitumen mixed with plastic which is used for construction of roads, sources said.

The company has its base in Bangalore where it has constructed a two-km road with bitumen mixed with plastic. Plastic was not used earlier for road construction in the country.

Director of the Central Road Research Institute (CRRI), Dr P.K. Nanda said that bitumen mixed with plastic or rubber improves the quality and life of roads. These polymers increase the melting point of the bitumen. Bitumen melts in summer and roads break. If rubber or plastic is mixed with the bitumen, it does not melt resulting in longevity of roads.

He said that concrete roads could also be constructed, but its constriction cost was higher than the other substances used for the purpose. The Deputy Director of the CRRI, Dr Sunil Boss, said that polymers mixed with bitumen increased the construction cost up to six per cent, but increased the longevity of roads manifold.

He also stresses the use of plastic as it helps improve the environment besides creating a source of income and improving roadÂ’s life.

He said that plastic of good quality was not used for constructing roads. Polythene bags thrown by people, are often used for this purpose. They pollute environment. The ragpickers collect these bags from garbage and sell them at a lower price which are then recycled.

The Bangalore-based private company purchases these bags from ragpickers at high rates, make powder from it and mix with the bitumen. Three to four per cent plastic is mixed, but it improves the quality of roads. Plastic increases the melting point of the bitumen and makes the road flexible during winters resulting in its long life..."

Photo courtesy of Myspace.com and Fullpassport.com
Posted by Ugo Okafor at 9:16 AM

Sorry for my bad english. Thank you so much for your good post. Your post helped me in my college assignment, If you can provide me more details please email me.