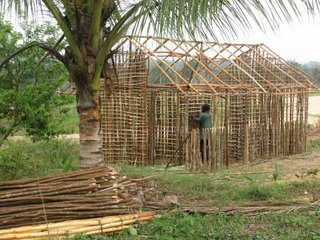 The blog Liberia Stories reports about a sustainable building being built by Obadiah Gondolo out of stick and mud. The articale says "...He will make the walls out of mud, and the roof out of palm thatch. The whole process will take three weeks, and will cost him nothing since the kind landowner has let him have the small space in her yard for free.

Obadiah learned how to make a shelter out of nature's gifts when he enrolled in a free vocational training program offered by Jesuit Refugee Service (JRS) in 2005. "JRS really did well for us," he says, referring to himself and the 30 others who were in his class. "It's the first institution that really taught me something useful."

Obadiah and his family (wife and two children) look forward to moving into their new place, which, though small, will also include a little shop. They are among the last Internally Displaced Persons (IDPs) still living in a nearby IDP camp in Salala, Bong County. Obadiah is from the Salayea District of Lofa County, but has chosen not to return until he graduates from high school. Because of the long civil war, however, he is still an 8th grade student at St. John Elementary and Jr. High School. "Before I go back to Lofa I will also learn to be an automechanic," he adds..."