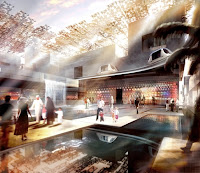 Vikki Miller of Building writes about the "Walled City of Masdar" in Abu Dhabi which will be one the world's first zero-carbon and zero-waste cites in the world after Dongtan and Huangbaiyu in China.
"...The Masdar development in Abu Dhabi is a 6 km sq, car-free “walled-city” scheme. The development is being driven by Abu Dhabi’s Future Energy Company and will include a new HQ for the company as well as a new university.

Norman Foster said: “The environmental ambitions of the Masdar Initiative – zero carbon and waste free – are a world first. They have provided us with a challenging design brief that promises to question conventional urban wisdom at a fundamental level. Masdar promises to set new benchmarks for the sustainable city of the future.”

Above is the worlds Solar land area.

Unveiled today at the Cityscape conference in Abu Dhabi, Foster + Partners said Masdar would be a dense, walled development constructed in two stages. The first phase would see the construction of a large photovoltaic power plant, which would later become the site for the second phase. 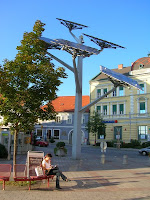 The surrounding land will contain wind, photovoltaic farms, research fields and plantations, so that the city will be entirely self-sustaining, the architect said.The development is set to open in late 2009..."

Photos courtesy of Building and Wikipedia
Posted by Ugo Okafor at 3:03 PM