"...the challenges are especially acute in France, due to a strongly established hierarchy and a conservative outlook on experimentation, especially toward those without much experience. “People don’t want their money to be spent by ‘amateurs,’ ” says N’Thépé. The situation is even more difficult for her, since she is a woman and a minority (she was born in Cameroon). “Yes, I sometimes feel myself as an exception,” she says..."

"...N’Thépé studied at the Ecole Spéciale d’Architecture in Paris (she originally wanted to be an interior designer, but amazingly she signed up at the wrong school!), where she studied with French architects Odile Decq, Paul Virilio, and Frédéric Borel. She worked for French/German firm LIN. Beckmann, born in Paris, studied at the Ecole d’Architecture Paris la Seine, and worked for architects François Seigneur,Will Alsop, and Jean Nouvel. The two met at Seigneur’s office, where N’Thépé was freelancing. 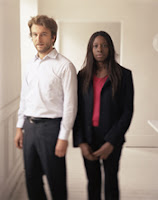 Their first big break came when they won the Nouveaux Albums des Jeunes Architectes Award, a major prize organized by the French Ministry of Culture, in 2001. The requests and contacts that came after this allowed them to formally start their new firm the following year.

The firm has a strong interest in research and investigating new materials and new processes, combined with sensitive, intuitive design. Their buildings are unique, sculptural (N’Thépé says the firm has a “plastician” way of drawing projects), and even sexy, but they all feel strongly rooted in their locations. “Our first approach to architecture has always been about how cities function,” says N’Thépé. “We’re very aware of how our ‘sculptures’ emerge, about the context and the stories we want to create.”

With its Versailles project, completed in 2005, the firm made small changes throughout the Classical-style school, like spiral-shaped neon lighting, new skylights, and bright new colors. It also fit a bold translucent Teflon membrane on top of the building’s courtyard, and created a futuristic new classroom with a translucent drop ceiling that projects fluorescent lighting patterns and colors. Their public housing project, finished this year in a tight development zone called Paris Rive Gauche, maximizes natural light through a large “fault” cut into its center.

The Vincennes zoo project will use artificial materials like steel, Teflon, glass, and plaster to create naturally inspired forms, such as massive rocks and a bubbly, translucent greenhouse dome. The firm, which has also stayed busy participating in exhibitions in Paris, Bordeaux, and Brazil, is now looking to branch out in both architecture and urbanism, “especially abroad,” says N’Thépé. So, if all goes according to plan, there will be a whole new set of hierarchies and expectations to defy..."

Photos are courtesy of Beckmann-N’Thépé website
Posted by Ugo Okafor at 1:39 AM