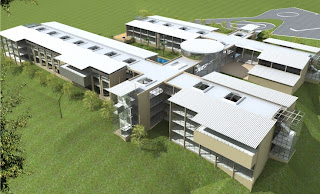 Commercial architecture within West Africa from Banjul to Yaounde is coming into its own style.SkyscraperCity profiles some of these projects from the conceptual to on site construction stage which are remarkable in their style and form.
A lot of these buildings are featured in the West African section of Skyscraper City.However I believe it would be a great idea to see some inherited forms from Traditional African Architecture being incorporated, to form a fusion with the Neoclassical,Victorian, and modern building technology widely adopted today in Africa.
Photos courtesy of SkycraperCity-West Africa
Posted by Ugo Okafor at 3:12 PM

hi, how's everyone here? I'm a new comer to this kind of website. Wish to get some new friends and learn some thing right here.