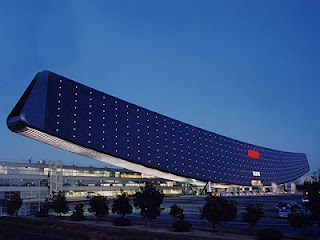 Photon International says "....In 2000, Sanyo claimed it wanted to create a 3.4 MW installation, the world's largest PV system, as a »message to the 21st century.« Instead, the 630 kW Solar Ark, dedicated on April 3, has become a symbol of pragmatism by using modules with deficient power that were headed for the junk heap.

In biblical times, Noah was said to have used »gopher wood« to build his ark.
While no one really knows what kind of tree it came from, it must have been a good wood, the kind that could withstand torrential rains and merciless floods. But one wonders how Noah would have responded to Sanyo Electric Ltd.'s modern-day version of his construction, called the Solar Ark. Unlike Noah's grand design, the 630 kW PV »vessel,« located next to Sanyo's semiconductor factory in Gifu, Japan, doesn't use state-of-the-art modules. Instead, the Solar Ark, which celebrated its grand opening on April 3, is constructed to large extent from factory rejects. What was intended as a testimonial to the future has become a symbol of pragmatism.

Back in 2000, Sanyo decided to mark its half-century anniversary by building the Mega Solar, a 3.4 MW monument to clean energy. It would include a 1 MW Solar Ark, fronted by a Solar Wave with 1.8 MW, with another 0.6 MW on the neighboring factory's roof. The installation was to use Sanyo's highly efficient HIT cell technology, a hybrid of crystal silicon and thin-film amorphous silicon assembled in modules with current efficiencies ranging between 14 and 15 percent, the planned successor to Sanyo's monocrystalline cells. The installation's design was lauded by the president of Sanyo's subsidiary Soft Energy Company, Toshimasa Iue, as »our message to the 21st century.« But soon the message began to look bleak.

That October, a scandal started brewing in Japan. Sanyo was caught illegally selling monocrystalline modules with insufficient output, exceeding a government-mandated 10 percent negative tolerance by 3 percent. The then-president of Sanyo Solar, Minoru Hagiwara, had known about the problem for two years, yet he continued to instruct salespeople to market the potentially defective modules. He was subsequently fired (see PI 11/2000, p. 26). A few days later, Sanyo Electric president Sadao Kondo resigned. Japan's Ministry of Economy, Trade and Industry (METI) considered filing a criminal complaint against Sanyo Electric for allegedly falsifying labels on the modules. In December, METI suspended the company's modules from the Japanese subsidy program for three years.

The Solar Ark - a symbol of sincere regret

That, says Yoshio Nagasuji, sales assistant in Sanyo's Clean Energy division, is when plans for the Solar Ark began to assume another guise. Instead of highlighting its new HIT technology by building what was to be the world's largest PV system, the company decided to use the Solar Ark to salvage the essentially useless monocrystalline modules that were being taken back from customers in exchange for normal ones. It is no coincidence that the number of recalled modules - 5,476 - was only slightly greater than the 5,046 modules that ended up on the monolith. By using the recall as an alternate means of »populating« the Solar Ark, the company not only saved face, but a lot of money as well. At the time of the scandal, the Financial Times estimated that replacing the customers' modules would cost the company 500 million JPY, about $4.6 million back then.

To Sanyo's credit, it has been very frank about reusing the substandard modules, and about trying to regain customers' confidence. »We have done this to show our sincere regret that this problem has occurred,« reads a company message on the web page for the Solar Ark, »and to express our willingness and determination to both remember what happened and how important it is to maintain quality.«

Even in its diminished state, the Solar Ark has to be admired as one of the most impressive BIPV structures in existence today, probably doing a better job of promoting solar than any previous PV installation. Passengers on high-speed bullet trains can't help but notice the edifice as they ride past on a nearby railway line. The curved structure has a length of 315 m; its highest point is 37 m. The south-facing wall containing the modules, which are installed at an angle of 81°, is 7,500 m². The modules also light up 77,220 LEDs installed in a red Sanyo logo and a white »Solar Ark« sign. Below the center portion of the Solar Ark, Sanyo has opened the Solar Lab, a museum with information on solar energy, including exhibits for children.

And what about the Solar Wave, the sea of modules that were supposed to front the Solar Ark? Nagasuji says Sanyo's chairman and founder, Satoshi Iue, has told the Japanese media the company still intends to install it where the parking lot now stands. »Maybe in two or three years. But it's only a plan,« Nagasuji says somewhat ambiguously. What would the capacity be? »Nobody knows,« he admits.

The only thing anyone knows at this point is that the Solar Ark is a magnificent construction that has helped salvage Sanyo's damaged reputation while giving the orphaned module.