Another Africa writes about a project that was recycling architecture between Ethiopia and Japan, 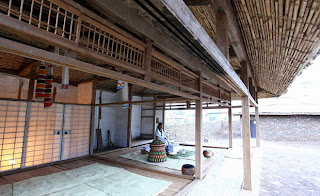 "...Having lived in Japan for more than ten years as well as being born in Ethiopia, makes for an exotic and rare profile. In all my wanderings, I have hardly met any Ethiopians or Eritreans, Habesha people, in Japan. So, when I read about a project that was recycling architecture between Ethiopia and Japan, to say that my curiosity was peaked would be down playing it. The project combines several interests of mine, Japanese traditional architecture, sustainable and environmentally conscientious design and Africa. The Millennium Pavilion relocation project began in 2007 to celebrate the Ethiopian millennium1 as way to build a bridge between the two countries. It is located in Gondar a historically rich and significant city in Ethiopia, the imperial capital during the 16th & 17th century..."

Photo courtesy of Another Africa
Posted by Ugo Okafor at 9:39 AM