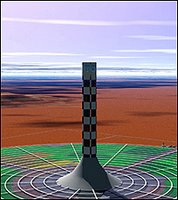 The technology of solar chimneys harnesses the power of solar radiation and thermal currents to generate Environmentally clean electricity.

The Schlaich Bergermann und Partner website also says "...With solar chimneys the greatest problems of our times,the environmental exploitation and the poverty and population explosion in the Third World, could be solved immediately and peacefully. We have designed the solar chimney such that it can be built indigenous in countries with ample solar radiation. So it is effective in a double way with electricity and work instead of oil and coal. Besides investigating the solar chimney's principle and its thermodynamics we have optimized the construction methods for the glass roof and the high chimney as well as the appropriate turbines and generators – in collaboration with the worldwide best experts.."

someday perhaps? I really liked this post. Thank you.

I became extremely excited about this exact idea without any real knowlege. Am interested in researching a small project in Kenya with a view to domestic use .
How about a micro project--- a model to generate a small current purely as a demonstration.
The potential is mind blowing Harnessing the worlds deserts ---forget oil roll on Sahara Kalahari Gobi etc....