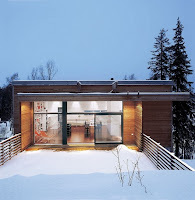 "...Rahel was born in Ethiopia in 1969, and grow up in Uppsala, Sweden. After receiving a Masters Degree in Architecture from Ecole Spéciale d'Architecture in Paris, Rahel worked as an architect in Paris, Luxemburg and Tokyo. After a decade of working abroad, she returned to Sweden in the year of 2000. Today Rahel runs her own architectural office 'RB Arkitektur', with both private and public clients. Rahel's architecture has attracted much attention in international media and has also been published in several architectural books..."

"...he jury, chaired by Residence's Editor-in-Chief Mårten Niléhn, recognized that some authors write the same book over and over again or return to the same character year after year. And some architects return to the same forms in an on-going greatest hits collection. Rahel Belatchew Lerdell does not belong to them. If you want to be a trademark, a Frank Gehry, a superstar who signs his or her autograph in steel and concrete
against the metropolitan skylines, it is an advantage to have certain characteristics and manners that are easy to distinguish..."

"...Another way to create a trademark is to deliberately try to drown your own attributes and creative tics, and start every building project from a blank sheet of paper. In which case a personal undertone is most often maintained, and for Rahel Belatchew Lerdell it is a certain continental elegance that shines through her buildings. They could as easily be situated in Paris as in Stockholm..."

"...As a Swedish version of Herzog & de Meuron she surprises with all her projects. Her architecture has got that certain something that you recognize when you see it but which is very hard to capture - our age. Rahel Belatchew Lerdell's design is contemporary and lasts long..."

"...- I am delighted and honoured, and especially pleased about the jury's motivation that captures the essence of my work where I try to avoid the most obvious repetitions, and instead aim to identify the uniqueness within each project, says Rahel Belatchew Lerdell..."

Photos Courtesy of rbaarchitecture.com and Arkinetia.com
Posted by Ugo Okafor at 5:17 AM

@ Ugo,
Will be stopping by your blog more often

Hi I've just discovered this AWESOMMMMME blog!!
Really looking forward to read your great post as an architect a woman an african and living abroad I was kinda lost (culturally)
But now since I know african architects talents are recongnized all over th world (actually in Germany and Sweden for now) I feel proudness and of course motivation!
Thx a lot for the great posts (I will say it again on other topics lol)

Somewhere I have noticed a similar theme, OK