Server Farms below Solar Chimneys could it work? 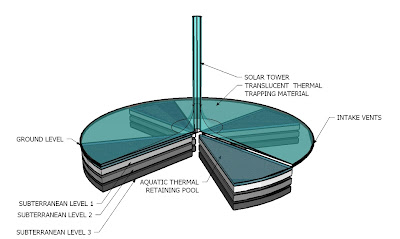 The chimney effect (stack effect) created by a Solar chimney tower of about 1000m high according to the Environ Mission website would be able to achieve wind speed of between 60-80Kph. With the aid of heat storing thermal ponds on the ground level around the pond this updraft effect could be sustained during the non-solar periods of the night.

I was wondering whether server farms could be incorporated in a subterranean level below these solar chimneys. Why because apart from the thermal pools and the foundation of the tower there is really nothing else that will be located at the underground level around the tower.

Would it not be amazing to use of convection air currents to achieve a very sustainable and Eco-friendly way cooling server farms and at the same time generate clean energy.
Posted by Ugo Okafor at 3:17 PM

Nice idea, but these chimneys in the desert will be far from everything. The colocation facilities / datacentres where the vast majority of servers are, are in big cities where engineers can easily go in order to do things - such as swap disks or install more servers. Also, these colocation facilities are best off near the main IXP's

This need for centrality is why large tower blocks in city centres that were build for office are being converted into colocation facilities.