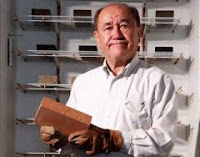 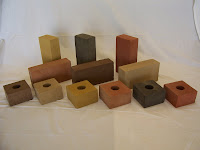 The National Science Foundation website says "...Researchers have found that bricks made from fly ash--fine ash particles captured as waste by coal-fired power plants--may be even safer than predicted. Instead of leaching minute amounts of mercury as some researchers had predicted,the bricks apparently do the reverse, pulling minute amounts of the toxic metal out of ambient air.

Each year, roughly 25 million tons of fly ash from coal-fired power plants are recycled, generally as additives in building materials such as concrete, but 45 million tons go to waste. Fly ash bricks both find a use for some of that waste and counter the environmental impact from the manufacture of standard bricks.

Once colored and shaped, the FPC bricks are similar to their clay counterparts, both in appearance and in meeting or exceeding construction-material standards.

Supported by NSF's Small Business Innovation Research (SBIR) program, Liu has been working since 2004 to develop the bricks. The first phase of support enabled him to make fly ash bricks more durable by engineering them to resist freezing and thawing
due to weather. Liu is now working from a second-phase SBIR award to test the brick material's safety and prepare it for market.

"Green manufacturing is a focus for the nation," said Tom Allnutt of NSF's SBIR program, who oversaw Liu's award. "Liu's innovative use of fly ash to manufacture high quality building materials will potentially decrease some of the negative environmental impact of coal-fired power generation while meeting increasing demands for greener building materials."

While researchers need to study the bricks further to determine how the mercury adsorption occurs and how tightly the metal is trapped, the new findings suggest the bricks will not have a negative impact on indoor air quality.

On average, air contains low amounts of mercury that can range from less than 1 nanogram per cubic meter (ng/m3) to tens of ng/m3--a small fraction of the Environmental Protection Agency limit for continuous exposure.

Inside a confined experimental chamber, the bricks did not raise the mercury levels in the surrounding air (originally more than one nanogram), and instead appeared to lower the concentration down to roughly half a nanogram.

Engineers from FPC of Columbia, Mo., developed the bricks with NSF support and reported their findings on mercury leaching at the May 7-10, 2007, World of Coal Ash Conference in Cincinnati, Ohio.

Henry Liu has received a number of NSF awards since 1980 and founded FPC after retiring as professor of civil engineering and director of Capsule Pipeline Research Center, a state/industry university cooperative research center established by NSF at
University of Missouri-Columbia in 1991 to research and develop capsule pipeline technology..."