Abodes for the Coastal Inhabitants of West Africa 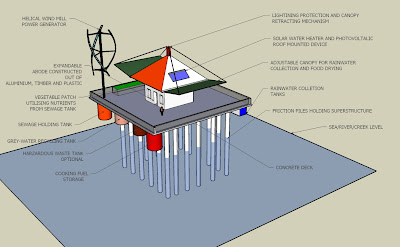 While accompanying my mum to one of the markets in Enugu about 4 months ago, we went the section that sells dry shrimps(aka crayfish). While she was buying some crayfish she told me that most of the crayfish in the market now comes from Bakassi area of Nigeria area now. This is because the catches which mainly came from the central Delta is no longer in demand because a lot of their crayfish is tainted by oil and fuel slicks from the leaking crude oil pipes in the creeks. This rather unfortunate calamity has destroyed the means of livelihood of a lot of fishing villages in the Niger Delta.

I believe that a lot of the fishing communities do have to re-settled to land based housing schemes because we can design modern housing schemes that borrow a lot of ideas from their traditional architecture which could end up serving them better.

Most of the fishing communities of West Africa tend to live in houses built on stilts or poles embedded in the river or sea-bed because of constantly changing daily or seasonal level of the river and sea water around them.

By incorporating rain collection devices on the roof as well as portable solar distillation equipment will alleviated a lot of problems the inhabitants have with access to clean drinking water.

The intended source of power supply will be from Photovoltaic and wind generated power.

Fish, crayfish and seafood drying can also be carried out on the retractable canopy of the proposed building prototype. Collection tanks for sewage and Grey water incorporated with algae will gradually break down the waste which could be used in the suspended vegetable gardens attached to the abode.

With a lot of the Nigerian coastal communities facing problems from poverty, destruction of their ecosystems, lack of clean drinking water I believe that we can contribute design,construction and technological ideas that could be used to develop modern housing schemes. These design could be influenced by Ijaw,Kalabari, Ogoni, Urobo, Iteskiri traditional architecture but still maintain the functionality, durability of an abode built on top of water.
Posted by Ugo Okafor at 6:07 AM

Great thinking, my friend!! You know, there is a village in Western part of Ghana just like the one you described . I think it is also a fishing village but it is called "Nzulenzu". I dream of the day West African governments will come together and invest money in exploring and ultimately developing multiple sustainable housing schemes that accomodates the day-to-day culture of such settlements, something very similar to your proposal in the 3d model (Thank you for the illustration! It makes a world of a difference.) to preserve not to destroy them. Thanks for posting.


great forum lots of lovely people just what i need


hopefully this is just what im looking for, looks like i have a lot to read.

An extremely outstanding and also helpful content at hand. My partner and i reproduced it and read the idea two times

Thanks for discussing this particular good post with a good subject, so much wonderful ability you've got.