Harnessing Wind Power for the Rural coastal Communities of Africa 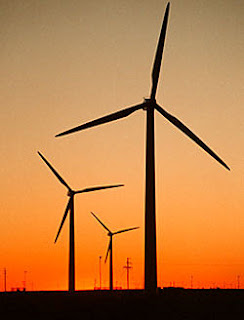 I don't know how many unused oils rigs lay wasting in the Bright of Benin which is off the coast of Nigeria's delta region but these facilites have the potential to be put into good use. Wind turbines could be erected to generate electric power for the rual coastal communities of the Niger Delta.

John Goghegan of wired.com writes in an article "Inherit the Wind" about how littered carcasses of unused oil platforms in the gulf coast could be used as the backbone of the first offshore wind farm in the United States.

"...The port of Iberia has never been busier. Situated on a narrow canal leading to the Louisiana coastline, the docks here throb with the sound of tugboats towing oil platforms to and from their anchorages in the Gulf of Mexico. When a drilling site is depleted, the platforms return to port; the docks are littered with rusting steel hulks waiting for their next run. 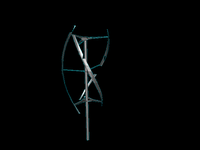 Click on Image on the Right to view animation of the new wind turbines design.

In December, though, one of these platforms, stripped and refurbished by a local startup, returned to sea with a new mission. The first of a flotilla to come, it carried wind-monitoring equipment as well as radar for tracking migratory birds. Those that follow will be topped not by drilling rigs but by windmills. The turbines are bound for an 18-square-mile area roughly 10 miles off the coast of Galveston, Texas, where the first offshore wind farm in the US is under construction. That’s right: The flower of sustainable energy is blooming in oil country. Get ready for the Great Texas Wind Rush.

Wind energy is the most promising carbon-free, nonnuclear alternative to fossil-fueled grid power. But regions with enough space and breeze for land-based wind farms—mostly in the Midwest—are far from coastal population centers; the cost of running transmission lines between generators and users is a major disincentive. That’s why wind-power entrepreneurs have set their sights on coastal waters. In the Atlantic, off Cape Cod, the 450-megawatt Cape Wind installation has been in the works for five years..."
Posted by Ugo Okafor at 9:36 AM