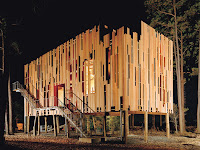 "...Snapped together from a combination of modules, panels, and preformed structural frames, the Loblolly house, named for the loblolly pines here in the Maryland tidewater area, is a manifesto for a new way of building. Architect Kieran and his partner, James Timberlake, have long been known for their finely crafted and energy-efficient buildings and materials. But the Philadelphia-based pair wanted more than just high-profile commissions – they were looking for a breakthrough technology that would let them make smarter, greener structures that could go up quickly and cheaply..."

"...In 2001, after studying how the automotive, aircraft, and shipbuilding industries had revolutionized themselves over the previous 15 years, Kieran and Timberlake realized that architecture needed the equivalent of an integrated circuit. They began to combine glass, drywall, pipe, and wood frames into finished units, each precision-engineered for cost, beauty, and sustainability. In the Loblolly house, the walls and floors are made of panels (some as tall as 21 feet) that were manufactured with wiring, insulation, plumbing, and ductwork already in place. And the main power systems of the home, including two bathrooms and the galley kitchen, were delivered to the construction site in preassembled, plug-and-play units. After the site was prepared, the 2,200-square-foot house took three weeks to assemble..."

"...THE MOST EFFICIENT WAY to construct a house is to build it in a factory. This reduces a home's "embodied energy" – the amount of power expended in its fabrication and construction. And conventional homebuilding is dirty work. From the fuel used by commuting workers to onsite diesel generators, the construction and operation of homes and other structures generates 40 to 50 percent of all the greenhouse gases in the US, according to the US Energy Information Administration. On top of that, studies suggest that more than half of a home's leftover materials – drywall and lumber – winds up in landfills. Plus, as anyone who has ever remodeled a kitchen knows, construction work isn't exactly high tech. Raw materials are dropped off at the building site and then assembled by hand with hammers and saws. The so-called material systems approach developed by Kieran and Timberlake banishes this primitive model. Better still, it's future-proof: Homes may be built to last, but the modules of material systems structures are built to be upgraded..."

Photos Courtesy of Wired
Posted by Ugo Okafor at 1:55 PM