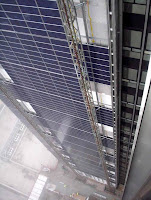 Metaefficient writes about "...The facade of this Manchester skyscraper (owned by CIS, an insurance company) was original covered with
small mosaic tiles, but after only six months, they began to detach and fall. A solution was needed, and a company called solarcentury came up with a clever idea replacing the failing tiles with solar cells. 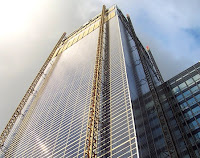 Not only do the solar cells provide a weatherproof barrier, they also generate about 390kW of power for the building. In total, 7,244 Sharp 80W modules are used to cover the entire service tower (but apparently only 4898 of these modules are "live" the others are "dummy modules" — strange). The building also has 24 wind turbines on the roof, which provide 10% of the total power used by the building..."

Photos courtesy of Metaefficient
Posted by Ugo Okafor at 4:17 PM